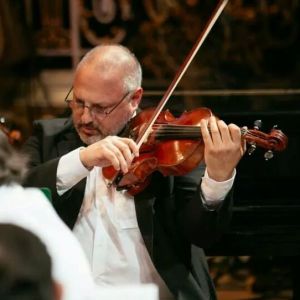 Paul Cortese, an active protagonist of his instrument, graduated from the Curtis Institute of Music, where he studied with the famed violist Joseph dePasquale.

Previously, under the tutelage of Stanley Nosal, Guillermo Perich, John Garvey, and Burton Fine, he pursued his studies at the University of Illinois and the New England Conservatory in Boston.

While completing his studies, Cortese performed with the Philadelphia Orchestra and the Boston Symphony, and was offered the Principal Viola position in the Teatro alla Scala. In 1986 he became the leader of the viola section of the Gothenburg Symphony orchestra under their music director Neeme Järvi. He made his debut with orchestra in Alice Tully Hall in New York in 1991. Although he has been guest principal viola in over a dozen European orchestras, Cortese dedicates an increasing amount of time to solo and chamber music playing.

Cortese has performed extensively in the US, Canada, and the European Union, collaborating with numerous chamber music groups such as the Kandinsky Trio, the Trio Arbós, and various string quartets, participating in international music festivals such as Tanglewood, Evian, Banff, Musicades of Lyon, Granada, Grand Teton, and many others. He has performed on numerous occasions with Context, a flexible chamber group of historically informed interpretation in the US. In Spain, he has been a member of the Beethoven Klavierquartett for over fifteen years, and has recently been performing with the Jacques Thibaud String Trio.

Cortese has recorded works by Elliot Carter, William Bergsma, Alan Hovaness, Vincent Persichetti, and George Rochberg , Shostakovich, Martinu, and works by Otto Luening, Witold Lutoslawski, Rebecca Clarke, Ralph Vaughan Williams, Walter Piston, and Roy Harris, Milhaud, Ernest Bloch, Debussy, etc. for DG, Chandos, ASV, Crystal, and many others, most notably the complete works of Paul Hindemith, in honor of his centenary, with the Philharmonia Orchestra of London on the ASV label, the only recording of its kind.

Born in Wisconsin to Italian parents, Paul currently lives in Barcelona, Spain, where he is professor of viola and chamber music at the conservatory of the Liceo , along with a regular masterclass in the Arcos Academy in Madrid. He has been collaborating with the Baltic Youth Philharmonic, Kristjan Järvi, music director, and has taught masterclasses in Spain, Italy, France, Vietnam, the US, Poland, Latvia, Germany, and Estonia. He currently plays a viola constructed for him by the fine Spanish maker Agustín Clemente of Madrid in the year 2006, along with an Iginio Sderci viola of Florence, 1972