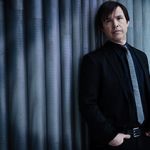 Since 2020 he is The Merited Artist of Hungary.
In 2018 awarded by the highest Hungarian musical prize: The Bartók – Pásztory prize.
He is the Head of the Violin Department in the Liszt Ferenc Academy of Music Budapest.
He is the double prize winner (1999, 2002) of the prestigious MIDEM Festival in Cannes, FRANCE. In 2012  “PRIMA” prize, as the musician of the year, in 1999 the HUNGAROTON PRIZE awarded him.
In 1993 the prestigious “Franz Liszt” prize given by the Hungarian Government.
In 1982 first prizes winner of Hungarian Radio and the Hubay competition (1983) in Budapest.
In 1985 he was awarded 3rd prize at the ‘Jean Sibelius’ Competition in Finland. He regularly keeps Mastercourses in Austria, Japan, Korea, Singapore, USA, Finland etc.
His career as an international concert violinist took off when Sir Georg Solti invited him to play Bartók 2nd Violin Concerto during the Bartók Festival at the Royal Festival Hall in London in 1988.
He is Hungary’s foremost violinist, frequent guest in the rest of the word.
So far he recorded 59 CDs / LPs / CDVs at several companies.
Vilmos Szabadi was among the privileged musicians invited by HRH Prince Charles to perform at the celebration in honor of Sir Georg Solti’s 80th birthday held at the Buckingham Palace in 1992 and in 1995 played the Strad violin owned by Spanish Royalty in Madrid.
He is regularly invited into the juries of leading international competitions as the Singapore, Hannover, Markneukirchen etc competitions, establisher of the inaugural Bartók concourse in Hungary (2017).
He plays a cremonese Laurentius STORIONI instrument dated 1778