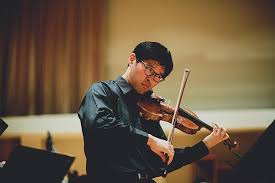 Kyu-Young Kim, Artistic Director and Principal Violin of The Saint Paul Chamber Orchestra, is one of the most versatile and accomplished musicians of his generation. His appointment as the SPCO’s Artistic Director in January 2016 marks the first time a playing member has been tapped to take the artistic helm of a major American orchestra. Previously, Kim served as Director of Artistic Planning with the SPCO all the while continuing to perform in the orchestra, and since assuming a dual role in 2013, the SPCO has named four new Artistic Partners and opened its new Concert Hall at the Ordway Center for the Performing Arts to great critical acclaim.

Hailed by the Chicago Tribune for his “flawless musical and technical command”, Kim has toured throughout North America, Europe and Asia, performing in such prestigious venues as Carnegie Hall and Lincoln Center, the Seoul Arts Center, the Palais des Beaux Arts (Brussels), and the Beethoven-Haus (Bonn). As a founding member of the Daedalus Quartet, winners of the Grand Prize at the 2001 Banff International String Quartet Competition, he performed in many of the major halls of Europe, including the Musikverein (Vienna), the Concertgebouw (Amsterdam), the Philharmonie (Cologne), the Cité de la Musique (Paris), the Mozarteum (Salzburg), the Festpielhaus (Baden-Baden), and the Megaron (Athens), and was a member of Chamber Music Society of Lincoln Center’s Chamber Music Two Program. He has also served as guest concertmaster of the Pittsburgh Symphony, the Minnesota Orchestra, and the Mostly Mozart Festival Orchestra, and is a core member of the Orpheus Chamber Orchestra. Kim has received degrees from the Curtis Institute, the Juilliard School, and the Cleveland Institute of Music, and has studied with Donald Weilerstein, Robert Mann, Jaime Laredo, Yumi Scott and Shirley Givens.