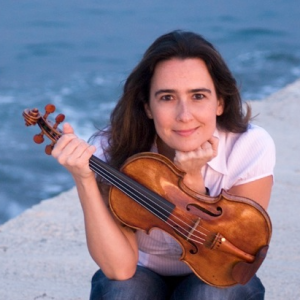 Eszter Haffner was born in Budapest, Hungary in 1969. She studied for 13 years in the Gifted Musician Class at the Budapest Liszt Ferenc Music Academy with Andras Kiss, Ferenc Rados and György Kurtag. After the completion of her studies in Hungary, she came to the University of Music and Performing Arts in Vienna, Austria to study with Gerhard Schulz (Alban Berg Quartet) and Josef Sivo. She received her Diploma with unanimous distinction and prize from the Department of Culture Vienna.

From 1987-1995 she participated in a variety of Masterclasses with Josef Gingold, Lorand Fenyves, Alberto Lysy, Tibor Varga, Igor Ozim, Sandor Vegh and in 1995, she completed postgraduate study in Holland with Viktor Liebermann and Philip Hirschhorn. Ms.Haffner has been the recipient of scholarships from the Alban Berg, M.Sobotka, Erasmus, Janecek and Ziehrer Foundations, as well as the PE Förderkreises (Promotion Circle) in Mannheim, Germany.

Because of her successful career in the arts, she received Austrian citizenship.

Her recordings reflect her unusually extensive musical range, covering chamber and concerto works from Haydn to Eisler. These include Piano Trios from Martinu, Mozart, Brahms, Schubert, Kodaly with the Haffner Trio, Mozarts Sinfonia Concertante with Bettina Gradinger, Schubert, Schumann and Eisler Sonatas on behalf of the Austrian National Bank.

As a pedagogue, Ms.Haffner`s experiences include 1999-2002 assistant to Prof.Gerhard Schulz and violin Lecturer at the University of Music in Vienna, as well as being a regular violin and viola instructor at Neuberger Seminare, Casals Festival France, Danish Strings, Int.Sommer Academy Semmering and Tokio, Japan and in the USA and Villa Musica Germany.

Since 2002 she has been Professor of Violin at the KUG University of Music Graz, Austria, and since 6 years at the Royal Danish Academy of Music in Copenhagen.

Ms. Haffner plays the “ex Hamma Segelmann“ violin by Michelangelo Bergonzi (Cremona 1750) from the collection of the Austrian National Bank.