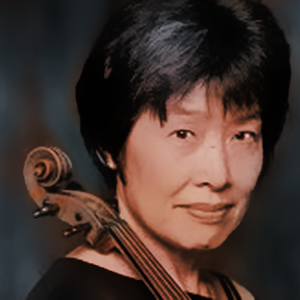 Nobuko Imai is considered one of the most outstanding violists of our time. After finishing her studies at the Toho School of Music, Yale University and the Juilliard School, she won the highest prizes at both the prestigious international competition in Munich and Geneva.

Ms. Imai has dedicated a large part of her artistic activity to exploring the diverse potentials of the viola. In 1995/1996, she was artistic director of three Hindemith Festivals at Wigmore Hall (London), Columbia University (New York), and Casals Hall (Tokyo). The annual Viola Space project in Japan, which was founded on her initiative in 1992, already celebrated its 25th anniversary. In 2009, she founded The Tokyo International Viola Competition, the first international competition in Japan exclusively for viola. An impressive discography of over 40 CDs includes her recordings for BIS, Chandos, Hyperion, Philips, and Sony, among others.

She has been a recipient of numerous awards including the Avon Arts Award (1993), Japan’s Suntory Music Award (1995), and Mainichi Award of Arts (1996). Toru Takemitsu composed the viola concerto A String around Autumn for her in 1989.

She has been Professor at the Detmold Academy of Music from 1983 to 2003, she currently teaches at the Conservatorium van Amsterdam, Kronberg International Academy, Ueno Gakuen University in Tokyo as well as guest professor at the Central Conservatory of Music in Beijing. Since the 2015-2016 academic year, she is Professor of the Fundación BBVA Viola Chair at the Escuela Superior de Música Reina Sofía in Madrid.

She has played a 1690 Andrea Guarneri instrument since 1988.